Laguna Board of REALTORS®, Our History

The Laguna Board of REALTORS® has never been large, but the part we’ve played in the development and guidance of the town of Laguna Beach and the surrounding area belies our small size. Our members have been civic leaders, and some of the names most associated with the founding of Laguna Beach are counted among our members.

Active from the beginning, The Laguna Board of REALTORS® predates the incorporation of the City of Laguna Beach by more than a few years. Founded on September 8, 1924, the original association (then named the Laguna Beach Realty Board) was not more than 18 members but included Henry Barbour –then President of the California Association of REALTORS®.

Other early members are easily recognizable for their names that still live on in our town – H.G. Heisler (for picturesque Heisler Park along Cliff Drive and his iconic historic home along Crescent Drive), J.S. Thurston (who’s family were among the early homesteaders in the Aliso Canyon area and whose family  count among even our contemporary civic and business leaders), Joe Skidmore (a prolific builder who also was instrumental in the founding of the Laguna Beach Chamber of Commerce), and E.E. and Joe Jahrus (key in both development AND the hastening of the growth of our town in the 20’s and 30’s by bringing building materials to town via the establishment of Laguna Lumber).

Toss in a few colorful characters like Lolita Perine, a former vaudeville player credited with creating the world famous Festival of the Arts “Living Pictures” vivant tableau, and developer Roy Ropp who, upon publically complaining about production values of the “Living Pictures”, was promptly put in charge and changed the name to ‘Pageant of the Masters’, the annual production that has brought millions to Laguna Beach across the years.

Our association hovered between 15 and 20 members well into the 1940’s, resulting in our first president, a well-regarded local businessman Roy Peacock, to serve as president five times.

The association stayed very active in many of the most significant changes to our town as we experienced explosive growth in the 1950’s and 60’s. Still small by today’s standards (50 to 90 members), our members drove many of the changes that make Laguna Beach such a vibrant community today:

During this time, the Board opened a new office in the downtown area on Mermaid Street (across from the location for the current La Sirena restaurant – a local homegrown hangout for good food).

Also during this time, the nature of our membership changed. The small ‘big name’ brokers who operated one-person shops or with just a few agents were replaced by a younger new type of agency (many started by younger brokers who had grown up in town). These agencies were more typically 10 to 30 agents and upped the game as the ‘luxury’ aspect of real estate in Laguna Beach became more prevalent and prices started their relentless rise.  Lingo, Nolan, Chateau, Chisman, and Edgewater were some of the agencies who dominated the local landscape in this era.

Also, as the membership grew to more than 200, the directors of the association had the foresight to look for a new larger location for our headquarters around 1970. A deal was struck to purchase the old Earl Secor Sign Shop at 939 Glenneyre St., next to the Nolan Real Estate office (now the Chicago Title building). Several of our members (including longtime member Rick Balzer) facilitated the transaction pro-bono to sell our old Mermaid location and purchase the Earl Secor site and build a new headquarters.

Innovative and seemingly very ahead of our time, a great deal of flexibility was built into the new building. What many have commented looks like we have a drive-thru window, is truly just that – created so members could drive through and pick up their route sheet for broker preview back in the day. The layout of the spaces was designed for Board use, but also so that we could lease the spaces should we choose in the future (and our frugal nature HAS caused us to lease out the non-critical spaces for extra Board income). Now fully owned and debt free, our building allows us the freedom to exist as a standalone Board well into the future.

The mid to late 80’s were a time of difficulty for our Board and for the real estate market at large. From the interest rate climb to above 18% (and for a short time 20%) a real estate slump in the early and late 80’s, and difficulty in bringing transactions together, the membership was anxious.

During this time, the Board was faced with consolidating real estate Boards in our area AND with a critical, contentious decision – to stay independent or to join a larger regional Board. This was a decision that almost quite literally tore our little Board of REALTORS® in half. After several votes, the decision was made to stay independent.

Though very difficult at the time, this decision in retrospect represents our need as a local Board to service very specific local requirements. Laguna Beach is a singular market and the Laguna Board of REALTORS® priority is to serve our member’s specific needs. We recognize the presidents of the Board of Directors who stood by our decision especially Marie Thomas who was president twice during this time and serves on the Board today as Director for Life.

Membership grew exponentially in the 90’s, and many of the smaller boutique firms that characterized our business through the 80’s were selling to larger firms like Grubb and Ellis (special shout out to “Grubby Bear” who holds a special place for many of the agents from this era), Coldwell Banker, Prudential and a few others.

During this time and in true Laguna Board fashion, several of the significant events that epitomize our contributions to our community were born. Recognizing a need to support our own, the Board created a charitable arm called “The Charitable Assistance Fund” to help our own members in need. Key to this new 501c3 corporation was the CAF first Board of Directors Executive Committee of LBOR presidents: Gayle Waite (president and incorporator) Dave Schaar, Rick McIntire and Michael Gosselin. Several REALTORS® and Affiliates donated thousands of dollars for the initial foundation “seed money” and to offset corporate formation costs.

The ‘Taste for Charity’ and the ‘Pet Parade and Chili Cook-off’ were born as signature events to support the Charitable Assistance fund (Caroline Haines, Jerry Bieser, Rick Cirelli and several others were the impetus to organize these events). These events have grown to eagerly anticipated fundraisers, with the good fortune of allowing our CAF to support many of the most critical local Laguna Beach non-profits. The Laguna Board of REALTORS® and Affiliates Charitable Assistance Fund has served as a template for many other REALTOR® associations to create similar organizations.

Also during this time, the real estate business underwent a fundamental shift as the internet and the age of information has forever changed the dynamics of our business.

However, through all of this, the Laguna Board of REALTORS® remains true to its roots and true to its independence – working for our members and supporting our mission – to protect our member’s ability to pursue their trade AND serve as the protector of private property rights.

As a strong and vibrant organization, heavily involved in civic matters (including facilitating the recent NAR grant to the Laguna Seniors, Inc.), we stand for strong civic involvement, with our members serving  at all levels of local government and supporting  charitable organizations. Our small size (currently 670+ REALTOR® members) makes us nimble, our local staff is focused on serving our members, and our members continue to be among the most actively involved of any real estate organization.

We look forward to our centennial in 2024, and another 100 years after that! 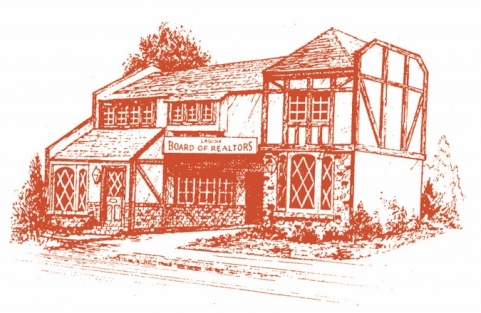 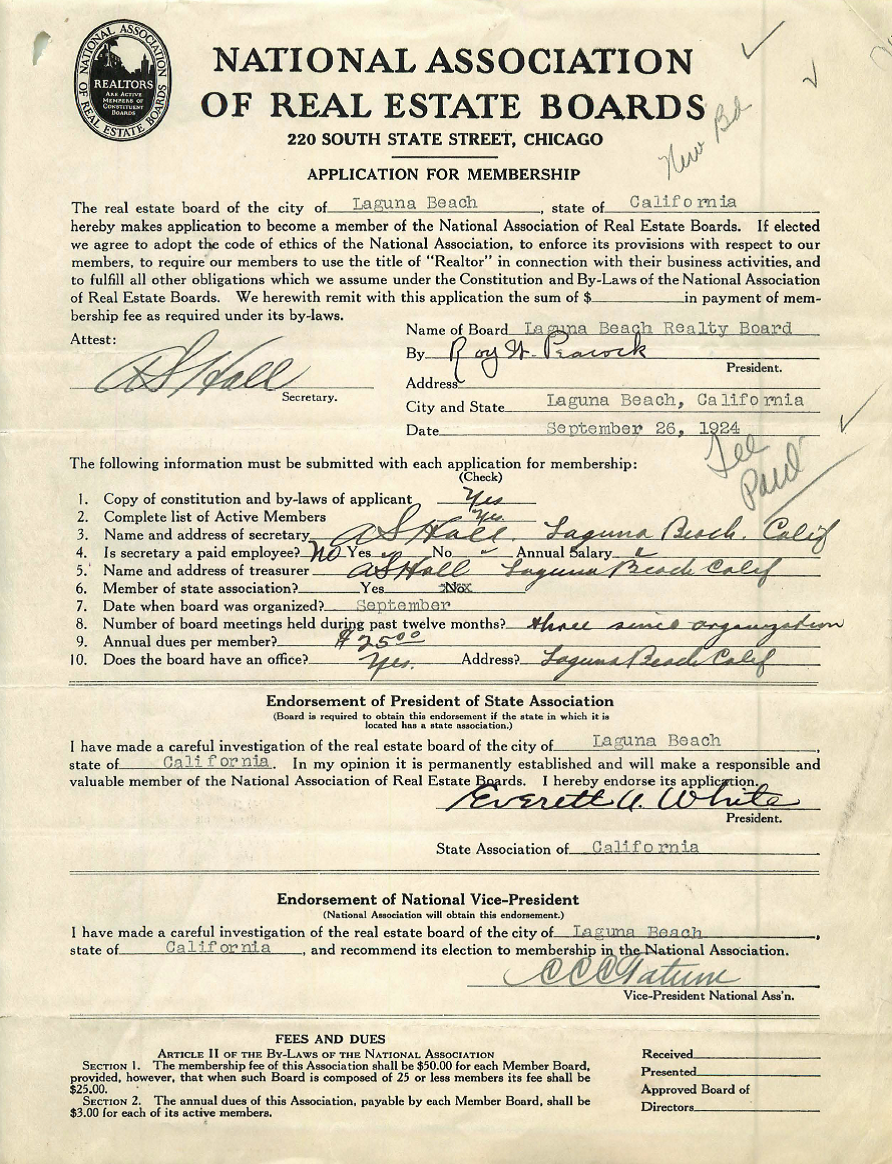